So, in lieu of writing on something genuinely helpful and informative today, we’re going to devote a few hundred words to a topic that’s probably as relevant to your business needs as the history of Mattel’s Barbie; who, despite her great fashion sense and spunky, can-do attitude, probably doesn’t play a big role in your day-to-day. Unless you work for Mattel. Or are Barbie. In which case, we apologize. (Big fan!)

Since we’re on the topic of superfluous facts: did you know her full name is actually Barbara Millicent Roberts? See, you’ve already learned something. Now you can’t accuse us of writing entirely without educational merit! 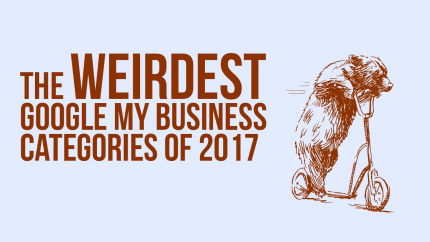 Anyway, perhaps you’re one of those people who really enjoys stockpiling frivolous information, like some kind of whimsical dragon whose hoard will never be stolen, because nobody else really cares about knowing what key in the musical scale most car horns sound at. (It’s F.). If that’s the case, this is the article for you.

We’re taking a look at some of the more “specialized” categories that Google My Business has offered for classification purposes over the years, because we all know that Google will not rest until it has made itself omnipresent in literally every aspect of our lives. In preparation for that grim (but very user-friendly) future, then, keep an eye out for these “companies” the next time you’re out on the town:

Okay, this isn’t a great first example, because it really isn’t a terrible inclusion. Given that we sort of rely on water to, well, live, perhaps it’s a sensible idea to have them mapped out. Granted, you can walk into just about any establishment and get it for free if you ask, but what does one do if they’re shy, or is dangerously allergic to cheap plastic cups?

Still, it’s hard to pinpoint why anyone would want to dedicate an entire category to one, because a fountain is most certainly not run on a sound business model. What additional information does it need to have up online? Does it have strict closing hours? Does it take Visa? Do I need to call ahead to schedule an appointment? I really don’t know how we’re supposed to get one verified, either, and how that distinguishes one from those that haven’t been. If one manages it, though, I’ll gladly drive however many miles it takes to visit, because I’m sure it will be spectacular.

Now we’re getting somewhere. You’ll note that this isn’t “airport,” which is a perfectly reasonable classification, or “airplane museum,” which is definitely something people visit. No, it’s just “airplane.” Does it have to have to have its address updated every fifteen seconds while it’s in flight? Perhaps one can become a monument of sorts if it’s left in the same spot for long enough? My working theory is that there are people out there who are much more adventurous about their travel booking than the rest of us are, and don’t bother with details like “protected skylanes” and “licensed professionals.” Or “scheduled departures.” Or “safety.” They just find the nearest machine capable of leaving the ground and hope for the best. Like your local taxi service, but with a greater emphasis on gravity.

This is a phrase that you have to read several times before you can truly understand it. The words make sense individually, sure, but when combined, they form some kind of Magic Eye puzzle that you have to squint at before comprehension comes knocking.

I understand that the tongue is a part of the animal that we can theoretically eat. We as human beings can theoretically eat most things. But just because we can put something into our mouths to chew and swallow, doesn’t mean we should. Especially if that something is part of another mouth. As a curiosity on some quirky bistro’s menu, I can see tongue fitting in just fine. As the centerpiece of an entire restaurant? That serves multiple dishes? Possibly composed of multiple tongues? It sounds like a meeting ground for people who will definitely get a low-budget horror film made about them some day. 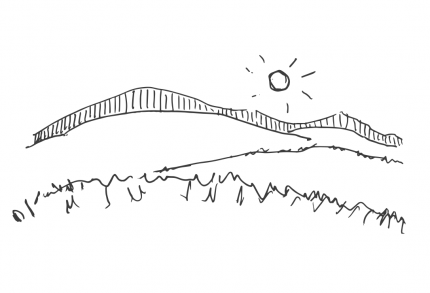 Here’s where things get murky. Are we monetizing large fields now? I mean, you can own empty land, but that’s not an investment you’re going to make a business page for in the hopes of increasing foot traffic. And even if you were, a grassland isn’t something that people in general get to own. It’s either part of some national park or out in those wild, free spaces of America where the buffalo still (hopefully) roam.

And, really, has anyone ever had the sudden, undeniable urge to visit a grassland without knowing where the nearest one was? “Honey, I’m going to stop by the grassland on the way home from work. I need to feel the wind in my hair and sun on my cheeks. Google says that I need to drive 1,500 miles to get there, yes, but distance isn’t important. I may be late for dinner.”

*Sadly, at the time of posting, grassland doesn’t appear to be an available Google category anymore. We’ll miss it. It was one of our favorites.

Another interesting combination of nouns. In this exercise, we take two very sad words and stick them together to create something even sadder. This appears to be another term for “orphanage,” but what a terrible alternative it is. Do we really need to add more letters and draw out the time our brains spend reading something so somber? And where do we stop expanding? “House for Children Who Do Not Have Families” rolls off of the tongue, too, though definitely not off one you’re eating in an unsettling restaurant. And it takes up far too many characters.

But let’s move on. It’s probably best we don’t spend a lot of time making jokes about orphans. 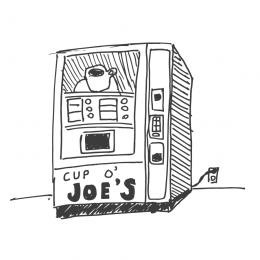 To be fair, if there was ever a convenience that most people would like to locate as quickly as possible, coffee would be the beginning and end of that list. Again, though, we’re dealing with individual pieces of property, not businesses, so a Google listing seems unnecessary. Besides, if one needs caffeine, they’re going to either make it at home or drive to Starbucks, which has helpfully established a presence on literally every street corner that exists in America, much like McDonald’s and those people flipping signs while dressed like Lady Liberty.

Now, if you were travelling a very long distance through very little civilization — through your local grassland, for instance — a little encouragement to get you through those next 100 miles might not be so terrible a thing. But I think it’s safe to assume that a coffee vending machine will always be located exactly where you expect to find it: at a rest stop or gas station right off of the highway.

Locating one in the middle of some dusty field after a ten-minute detour would probably lead to you being abducted, or possibly transported into a Folgers commercial. And nobody wants that.

Google appears to have misspelled this one. Clearly, it was going for “empty parking lot,” which isn’t exactly hard to find (or write), but our friendly search engine again felt that extra letters were necessary. Unless this is some kind of designated area for a new preparation regime that I haven’t heard of. Are we making preteens run obstacle courses and do drills before they’re allowed to drive now? A sound body encourages a sound mind, after all. Think of how prepared Amanda will be for the “ten and two” rule after you’ve made her run through four miles of mud and barbed wire.

I’m pretty sure this just involves handing your keys over to another person and saying, “Hey, you drive.” In that light, I assume that every square foot of habitable space in the world aside from the Mariana Trench could be considered one of these.

A bit of research reveals that car sharing is apparently a system that allows you to rent out vehicles at hourly/daily rates, but in a way that is much more casual than your typical Enterprise contract or one-sided bargain with your brother. You check them out on an as-needed basis and leave them at predetermined spots when you’re done.

This actually sounds like a good idea. Carpooling without having to actually interact with other people? Seems like a win-win to me, though I do hope that these drop-off locations are more along the lines “in front of your neighborhood grocer” and not “in the middle of this dark alley on the outskirts of town.” 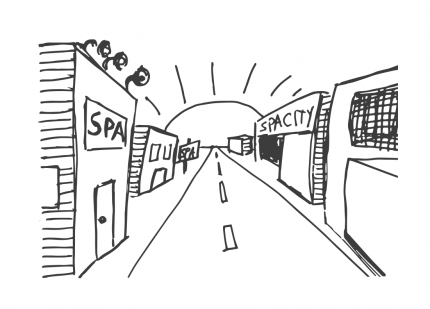 Look, we’ve all seen The Stepford Wives. A vacation resort’s ability to unsettle you is directly proportional to how big it is. A little boutique tucked away in some trendy center? Chic. Elegant. An entire community of several hundred residents taking up multiple blocks, everything there tailored to you and your needs? That is either a cult or a front for experiments in artificial intelligence. You can’t have a municipality dedicated solely to nail care and facials made of who-knows-what without there being an ulterior motive somewhere.

My point is that, if you are one day told by a stranger about a mysterious town that offers a cure for whatever ails you, you’re better off treating yourself to an ice cream cone and hot bath than you will be getting embroiled in a centuries-long conspiracy and possibly being replaced by a robot. Sure, that “quiet little town” may be verified by Google, but all the forces of evil need to get that checkmark is a mailing address and working telephone number.

That wraps up our look into some of the more esoteric corners of Google’s vast domain. Did you find it unsettling? Stimulating, at the very least? If nothing else, you now have some fun trivia to impress your friends with the next time you’re all out and searching for a good sushi place, or trying to find a store that sells accessories for Barbie. They’re difficult to find, I know.

Oh, you want her to be an astronaut? Good choice. Reach for those stars, Barbara.